AND THE LAST ONE 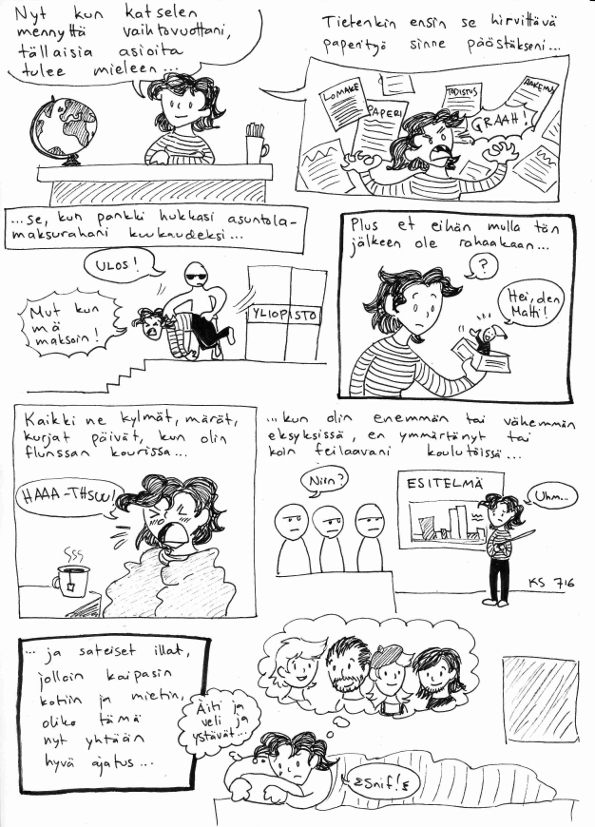 ”Now when I look back to my year abroad, these kind of things come to mind…” //
Of course all the horrible paper work I had to get through just to get there… //
…how the bank lost my money for a month… ”Get out!” ”But I did pay!” //
Besides, I have no money after all this… ”Hi, you’re broke!” //
All those cold, wet, awful days when I had the flue… //
…when I was more or less lost, didn’t understand or felt like I was failing in school work… ”Yes?” //
…and the rainy nights when I missed home and wondered if this had been a goodidea at all… ”Mum and brother and friends…” But much more than rainy nights there were sunny days (maybe not literally)… //
I attended interesting classes… //
…drew a lot of comics and wrote letters… //
…trained aikido with nice people… //
…saw new places and the nature and birds of Scotland… //
…and made a lot of new friends with whom I did all sorts of great things! (Not to forget Ghost Tour, walking on the beach, pub quizzes, gigantic portions of ice cream…) ”In the end I could sum it up into three words…” //
TOTALLY WORTH IT //
”The Finnish girl with the hat thanks… and signs out.” //
The end of Scotland Edition. 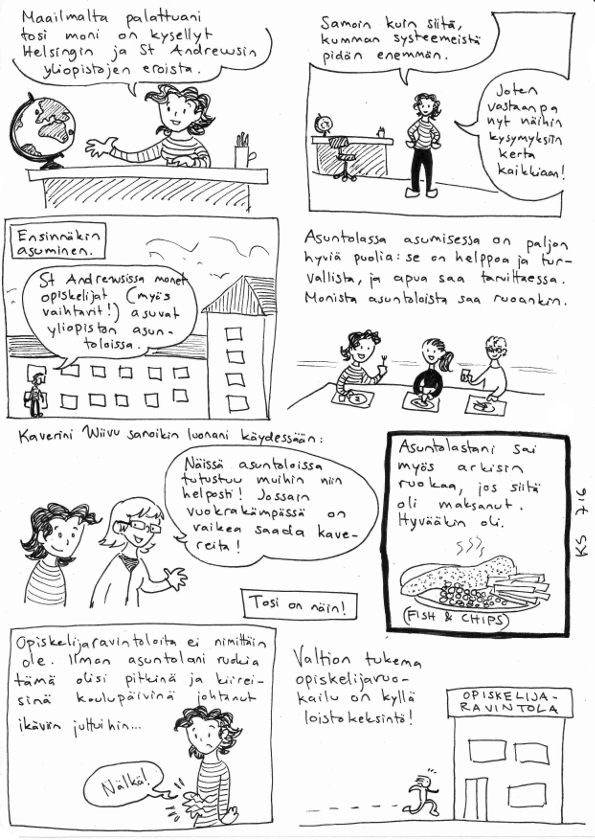 ”Since I came back from abroad, many have asked about the differences between the universities of Helsinki and St Andrews.” //
”And also which one I like better. So I’m going to answer these questions once and for all!” //
First off, housing. ”In St Andrews lots of students (exchange students, too!) live in halls owned by the University.” //
There are lots of good sides in living in a hall: it is easy and safe and you get help if you need it. Many halls offer meals, too. //
My friend Wiivu said when she visited me: ”You get to know others so easily when you live in a hall! It’s hard to make friends if you live in a rented flat!” And I agree! //
In my hall one got meals on weekdays if one payed for it. It was pretty good, too. //
There are no student restaurants. Without the meals in the hall long and busy school days would have caused unpleasant things… ”Hungry!” //
Student meals supported by the state are a great thing! 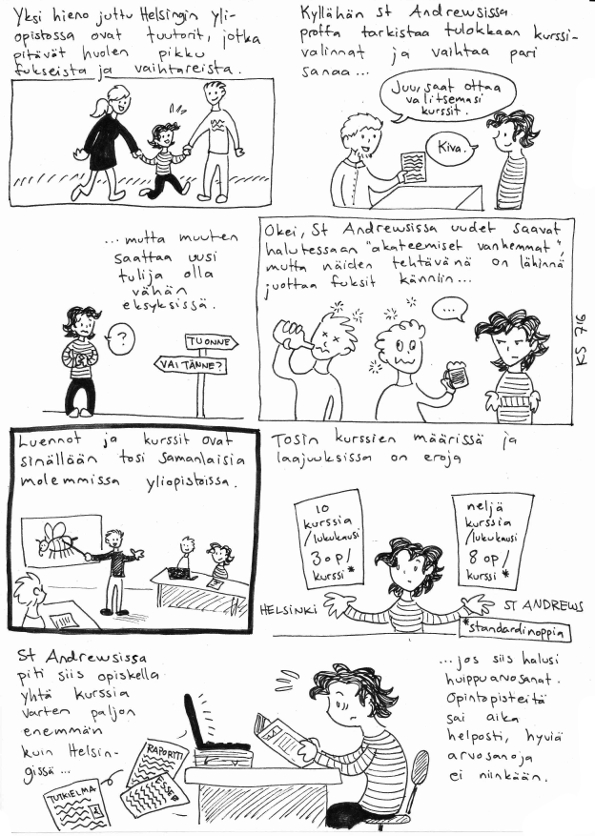 One great thing in the University of Helsinki are the tutors who take care of little freshers and exchange students. //
All right, in St Andrews the professor checks your module choices and has a little talk with you… ”You can takke the modules you wanted.” ”Nice.” //
…but other than that, a newcomer may be a little lost. (This way… or that way?) //
Okay, in St Andrews the newbies get ”academic parents” if they want but their point is mainly to get freshers drunk. //
Lectures and modules are pretty similar. //
Though there are differences between the numbers and lengths of the modules. (Helsinki: 10 modules/term, 3 credits/module*, St Andrews: 4 modules/term, 8 credits/module* (*standardized credits)) //
So in St Andrews one has to study much more for one module than in Helsinki… if one wants top grades, that is. Getting credits was pretty easy, getting good grades, not so much. People also stress about their grades much more than in Helsinki. During the exam weeks it was a little like this… //
EXAM STRESS ”C’mon, relax, your first year grades don’t even affect your final grades!” //
Or, like one fourth-year biologist said: ”When it comes to grades, St Andrews is a hissing little pressure cooker!” //
Also, failing an exam was a big and bad deal in St Andrews, and it is not very easy to re-sit them – sometimes it’s not possible at all! //
”In Helsinki it’s not a big deal to fail in an exam – I have re-taken a couple myself. That’s why there isn’t nearly as much exam and grade stress!” //
However, you got a lot of feedback and comments on things you did, and it was sometimes useful, too… ”My eaays wasn’t this long!” (Professor A’s comments – Professor B’s notes) //
School stress may lead to sad phenomena… ”Did you hear that some student killed themselves?” ”They say it happens almost every year*.” (*I don’t know if this is true but that’s what they said.) //
Sense of community was something else in a small university town, though. //
”So was this the thing the principal send everyone e-mail about and why they served hot chocolate in the hall yesterday?” ”Exactly.” 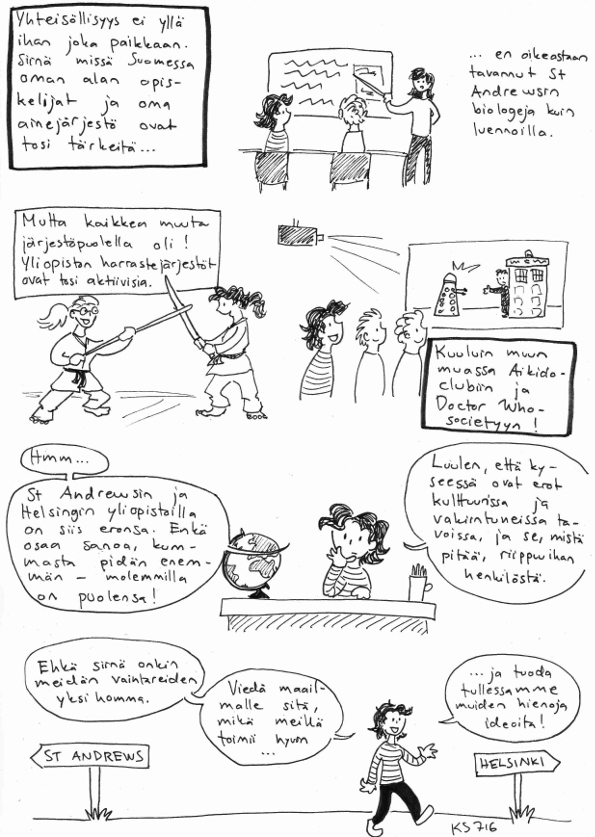 Sense of community doesn’t apply to everything. Whereas in Finland the people who study with you and your own student organisation are really important… //
… I didn’t really meet the biologists of St Andrews anywhere but on the lectures. //
But organisation-vise there was everything else! University’s societies are really active! //
I joined aikido club and Doctor Who Society, among others! !!
”Hmm… So there are differences between the universities of St Andrews and Helsinki. And I can’t say which one I like better – they both have their pros and cons.” ”I think it’s about differences in culture and traditional ways of doing tings, and what you like is up to you.” //
”Maybe that’s a job for us exchange students.” ”To take abroad what we do well… and bring back great ideas from other places!”