”Because my thesis is 40 pages of scientific text I made a more easily digestible version. The topic is the effect of color morph on the habitat selection of tawny owls.” //
The brown and black colors of birds are caused by melanins. Their amounts are genetically coded. Light feathers have little melanin. Dark feathers have lot of melanin. //
Some species are color polymorphic which means that there are differently colored individuals. Color morphs are often different from each other. For example, darker individuals are more aggressive than lighter ones. //
”Coloration affects behavior, too. On exothermic species, such as vipers, pale individuals have to bask in sun longer than darker individuals. //
Differently colored individuals may also prefer different environments: dark barn owls nest on more open areas… than lighter ones that prefer more forested environments. //
”Tawny owl has two color morphs, darker melanistic brown morph and lighter grey morph.” //
”Even though tawny owl is a widely studied species, little is known about their nest site choice. Therefore I studied it in my thesis.” ”Tawny owls have been studied in Finland for decades so there is plenty of ringing data. One year I assisted with the field work, too.” //
”In addition to the ringing data I needed data on what kind of places tawny owls nest.” //
”Nowadays there’s plenty of electronic map data so I could make myself a map that suited my needs. From it I could see forests, fields and water bodies among other things.” //
”In the end I had an electronic pixel map… and tawny owl ringing data from South Finland from 2006-2017.” //
”After that I hit my head in the desk.” //
”I mean… made different statistical analyses to find out possible interactions between owl coloration, number of eggs and chicks, timing of nesting and the surroundings of the nests.” //
”And here’s what I found out:” ”First: tawny owls prefer to nest in places with plenty of open and urban areas in the surroundings.” //
”Secondly: brown females prefer old forests and open areas more that grey females. There were no differences between differently colored males.” //
”And thirdly: the surroundings of the nest site did not affect the number of eggs or chicks or the timing of nesting.” //
”So that’s what I found out. By why are things like that?” //
”according to one hypothesis, animals should choose to live in a place where they get as many offspring as possible. Tawny owls, however, do not seem to do so. Possibly they favor open areas because there is more prey there than in the woods which may help them survive the winter.” 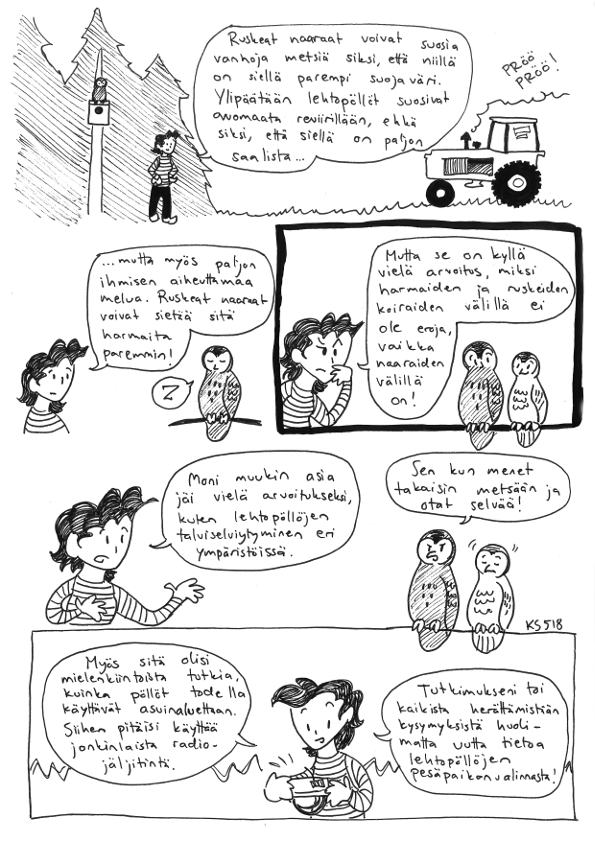 ”Brown females may prefer old forests because they have a better camouflage there. All in all, tawny owls like to have open areas in their territory, perhaps because there in plenty of prey…” //
”…but also lots of human-caused noise. Brown females may stand it better than grey ones!” //
”But why are there no differences between grey and brown males when there are differences between differently colored females? This remains a mystery.” //
”Many other things are still unknown, such as how tawny owls survive winters in different environments.” ”Why don’t you just go back to the woods and find out?” //
”It would also be interesting to study how owls actually use their territories. It would have to be done with some sort of a radio-tracking device. But despite of all the new questions that arose, my study brought up new information on the nest site choice of tawny owls!” 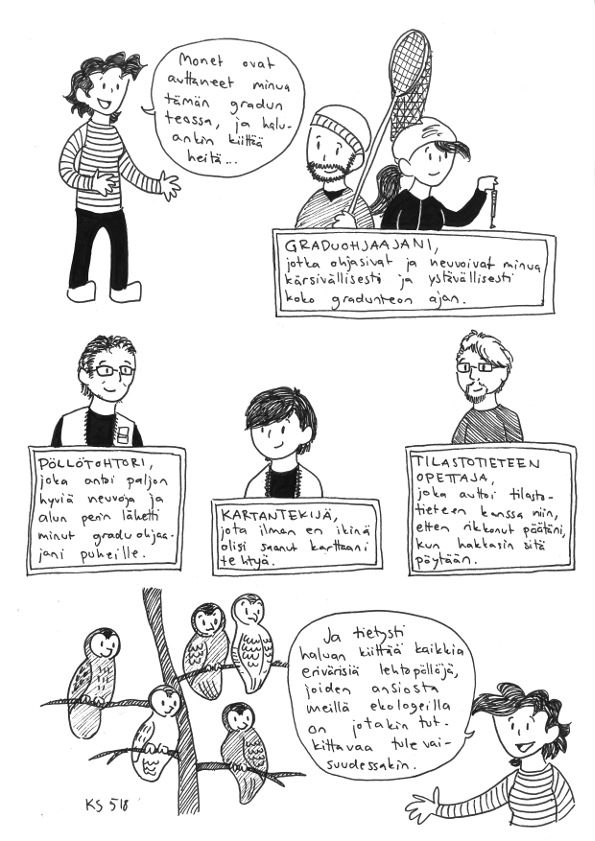 ”Many people have helped me with the making of my thesis, and I’d like to thank them…” //
My thesis supervisors, who guided me with patience and kindness through the whole process. //
The owl doctor, who gave me lots of good advice and told me to go to talk to my supervisor in the first place. //
The map maker, without his help I could never have made the map. //
The statistics teacher, who helped me with statistics so that I didn’t hit my head in the table too badly. //
”And of course I’d like to thank all differently colored tawny owls. Thanks to them we ecologists will have a lot to study in the future!”

Onko joku yllättynyt, jos kerron, että tieteen popularisointi on minusta kiinnostavaa?
Is anyone surprised if I say that I find popularizing science interesting? Hannibal has crossed the Alps. //
The Eagle has landed. //
Kati has handed in her master’s thesis. 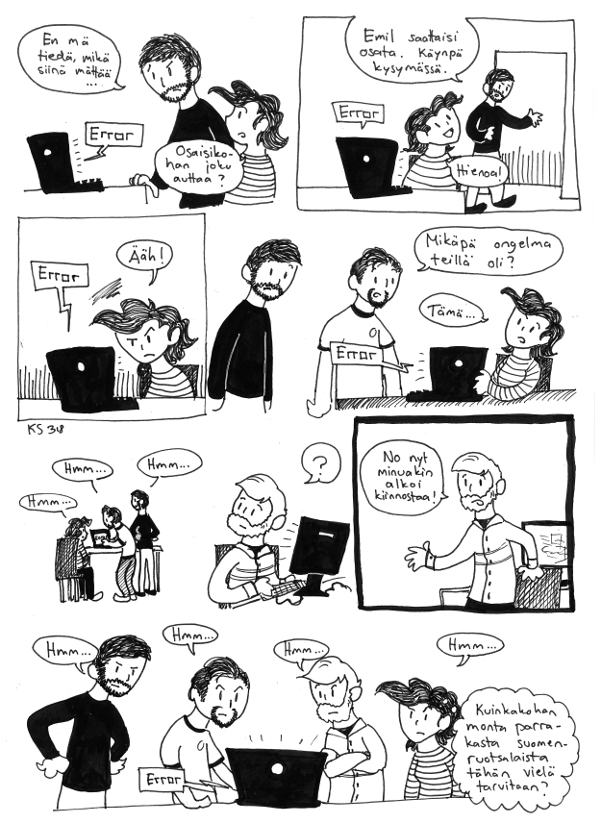 Kävi ilmi, että kolme riitti. Kiitos heille kaikille!
Turns out that three was enough. My thanks to them all!

PLAGUE TO THE RESCUE! ”Seriously with my thesis now.” //
”I should be going on a field station in a couple of days to ”finish” my thesis but the statistical analysis is not yet ready…” //
”…because i don’t understand statistics. To get the analysis done, I would need to meet my supervisor which I don’t have the time for as I need to go to the field station… which is no good if the analysis is not done.” //
”SURPRISE!!!” ”Eek!” ”I don’t have the time to be ill NOW!” //
”Except…” //
”…now that I’ve got the flu, I can call the field station and move my thesis-writing week for next week. And I’ll have time to meet my supervisor and get the analysis done before I head to the field station.” //
”Perfect. Now I’ll just go home to drink some hot blackcurrant juice.” //
”That… wasn’t exactly the reaction I was looking for.” ”Hey, for once someone appreciates.” 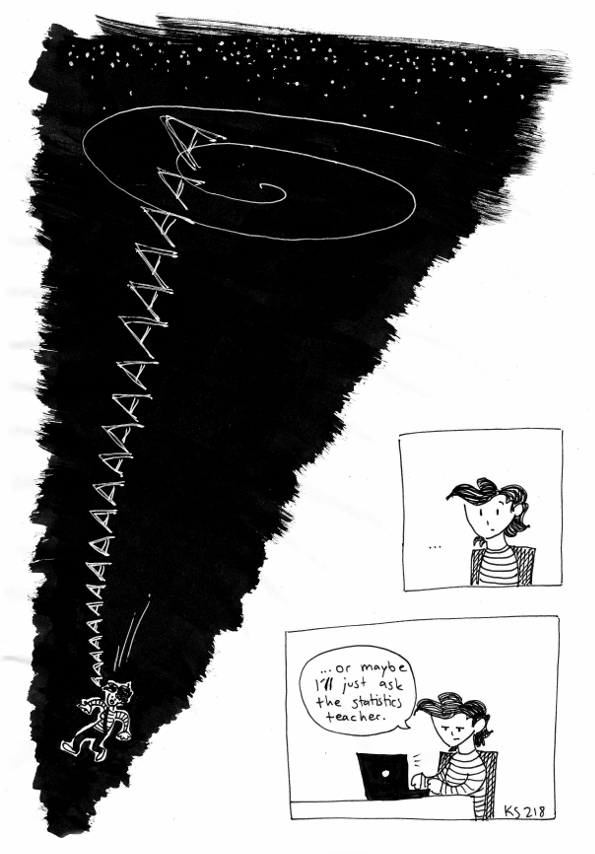 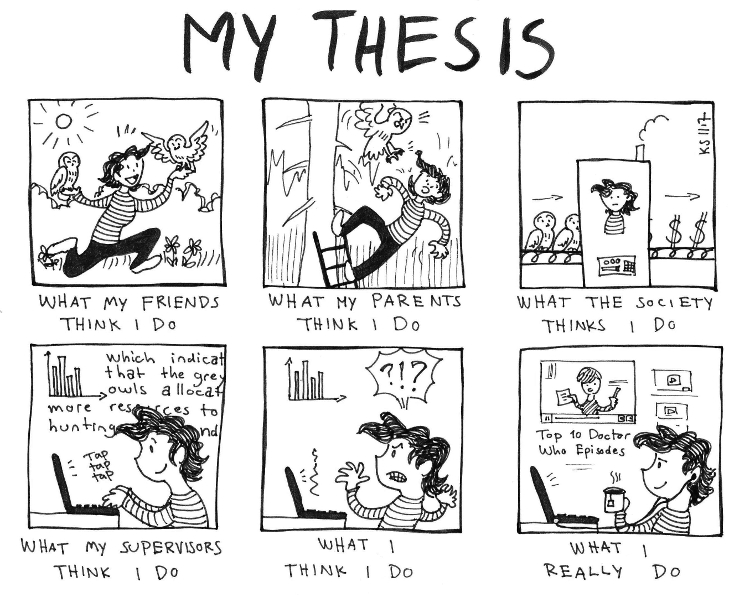 OWLING 8: THERE ARE OTHER BIRDS, TOO

OWLING 7: A COPSE BY ANY OTHER NAME

Tämä tapahtui syksyllä, myyräpyyntien aikaan.
This happened in the autumn when we were trapping voles.